Halifax – Nova Scotia…..did I say I love this place?

Day 2…..We weren’t actually supposed to spend the night here in Halifax, but because the only pilot at Shelburne is on sick leave our captain had decided to stay put and miss out today’s intended port of call (health and safety again) But we only have until 11.30 am so we skip breakfast and run ashore (we like showing off our athletic abilities)

We take off on a serious hike around Point Pleasant to clear the cobwebs (and the alcohol induced haze from yesterday) This park on the far side of the estuary is as a really interesting place with many things to explore, like the ruins of forts and bunkers, wildlife and of course the locals, who also appear to enjoy showing off their athletic prowess. There are masses of joggers of all shapes and all sizes, but strangely all the females are young, petite and glide effortlessly around in their colourful lycra. The men however are all middle aged, rather portly and lumber around leaden footed in sweat stained football shirts and baggy shorts. It took me ages to work out who was trying to impress who, but in the end I had to admit that I found it was the highly coloured, effortless displays from the females that were the most enticing (and who wouldn’t?)

Time for some souvenir shopping and a final amble along the boardwalk before heading back to the ship to wave a reluctant goodbye to this wonderful city.  Once again we were happy to return to Halifax and she certainly didn’t disappoint. Here to the next time……………

Day 1….The city of Halifax, in my humble opinion, is one of the best visits for those cruising the east coast of Canada and the USA . There is a fantastic boardwalk with great views across the harbour towards Dartmouth and the island of St George looking toward the mouth of the estuary. Unlike most places the cruise terminal (?) doesn’t share space with the container port, so everything appears bright and clean and exceptionally well looked after.

There are plenty of interesting sculptures along this easy route which takes you past some of the most desirable places to eat, without the need for walking up into the city, where of course there are also numerous places serving excellent local food (and drink)

The town itself a very interesting mix of old and new, the highlight of course being the citadel at the top of the hill. But don’t ignore the mass of wonderful parks which are crammed with beautiful flower displays and no vagrants can be sleeping rough on the benches (none that we noticed anyway) to spoil the atmosphere (literally)

We walk up the steep hill to the entrance of the fort and arrive just minutes before midday and the firing of the signal gun. Because we’re right under the wall from where the cannon is fired, we’re asked to step to one side (for health and safety reasons of course) and given a countdown with clear instructions to cover our ears. As usual there are a group of belligerents, either claiming they were in the military for years so are used to such loud reports or those just refusing to take advice. Many are clutching their tablets with both hands, arms fully extended and ready to capture the moment as a few million pixels, never again to be viewed!!

Now I like my hearing, I find it’s quite important for the continued enjoyment of my life, so I take the proffered advice. But I’m not watching the firing of the gun, that’s going to just be a big puff of smoke, preferring instead to watch the individuals who don’t realise exactly what is about to happen.

Ten seconds, nine, eight, seven….the gathered are smiling and happy…..four, three……they tense with fingers poised to take this most memorable of photos……….one………BANG!!!!

One of the ex-navy guys swears so loudly I can hear him even though my ears are still covered and he’s twenty yards away. Most of the people in my field of vision act on their natural instinct and duck, hands instantly flying to cover their assaulted ears but it’s far too late.  Tablets and photographs are momentarily forgotten and in some cases they’re almost thrown to the ground in violent retribution as if they had somehow committed the user to the task and were now solely responsible for the outcome.

I didn’t actually see anyone collapse with blood oozing from their ears but some of the once belligerent bystanders were definitely having second thoughts about their own stubbornness. One lady announced (well rather shouted as she couldn’t actually hear anything)  “I hope that was worth it.” She busily slapped herself on the side of the head……………as if that was going to help or make the slightest difference.

Anyway…….we moved on, not into the citadel this time, but around the outside and down the hill toward the far side of the city. We had it in mind to head for the Titanic cemetery, but having stopped and quizzed a local we realised it was a bit too far to walk (something else to organise for next time) 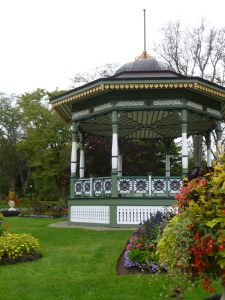 We spent the rest of the morning wandering around a couple of interesting (not Titanic) graveyards and several parks, then finally the time arrived to head back to the port area for lunch. I’ll say no more than it was very nice (I think) and very boozy (I think) and we ate and drank far too much (that I know for definite)

More wandering around in the afternoon (more like staggering to be honest) and despite being completely stuffed to bursting I just had to have an ice-cream from the infamous ‘Cows Dairy’ very yummy.

As we have an overnight stop here we had our evening meal sat out on the boardwalk at one of the many restaurants, The Bicycle Thief, which was very busy but the food was really good (if a little on the expensive side)