Right……time for this blogger to get serious…..why?
Well because St John’s is a seriously good place to visit.
We docked fairly early and as usual we waited for most of the rest of the ship to disembark before we headed ashore, mainly because it takes so long to get all those going on the ships tours off the boat it’s easier to have a lazy breakfast and take our time. Anyway the weather is fantastic, a lovely warm and sunny day but quite humid, still mustn’t grumble.
We set off toward Signal Hill, the place the first transatlantic cable came ashore back in the 1800’s, and a great lookout spot for the troops at the time to place their big cannon to protect their settlement. On the way up the steep hill we came across the Geo-park and took a detour to explore the history of the area via reconstructions of the structures and dwellings of the first settlers. Very interesting even if there was no running water, wi-fi or memory foam mattresses.
There were quite a number of people around us but we were surprised to note that we’re the only tourists, everyone else was a local resident busily picking the plethora of wild bilberries for their tea.
So we pressed on up the hill, now having to work harder to battle the strengthening wind near the top. The views were amazing, only spoilt by masses of other tourists clamouring for the best spot overlooking the bay.
Bloody tourists!!!!!! 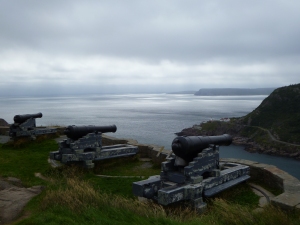 The real beauty of the place is that from this spot several coastal paths have been meticulously constructed and for the next two hours we ambled around these boardwalks admiring the wonderful sights around each corner.
We return to the road leading back into the town via the estuary path which would have been quite treacherous in the past, but now it’s been made so easy and enjoyable to walk along with the construction of a meandering wooden pathway. We stopped to peruse a map we’d been given at the terminal (there is that awful word again) and several of the locals stop to show concern that we may be lost or even worse not enjoying ourselves in their town. They point us in the direction of the local lake (a short walk away) and tell us there’s a quaint fishing village at the far end of the lake with a pub which produces its own ale. Before they have time to wish us well on our journey we’re off, after all who can resist local brew. However on reaching the lake we realise that reaching the pub before the ship sails is very unlikely…….considering this lake is almost the size of Wales. Ah well, maybe next time.
We finally made it back into the town centre and visit the cathedral where you have to be careful of falling masonry pretty much everywhere inside the main sanctuary???????? I reckon back in the UK the whole place would have been condemned until the whole of the roof was replaced.
The walk had taken its toll and we needed refreshment. More locals had obviously noticed this fact and we were swamped with recommendations. Most of them cited ‘The Duke’ as the best purveyor of fish and chips in the region so once again off we set, hoping this time our goal was still in the northern hemisphere.
Fortunately it wasn’t too far away and we’d just made it into ‘The Duke’ when the heavens opened and what can only be described as a deluge continued for around an hour. Lucky or what??
Now I’m not the greatest lover of fish, for me it’s all a bit too fishy, but it is fair to say this was fish so fresh it melted in the mouth, just delicious. The beer was really good as well and after the rain had finally abated we set back off for the ship, our faces bathed with the broadest of smiles following a truly special day……..Thank you St John’s.
The verdict…….this is a great place to visit but be warned the hills are steep and bountiful. The wind when it blows is nothing short of a hurricane and if the locals direct you somewhere assume it’s on the other side of the world. Oh and one more warning, don’t stop and stand too close to the edge of the pavement unless you intend to cross the road. Why? Well because all the drivers we saw slammed on the anchors if any pedestrian was within spitting distance of the kerb. On more than one occasion we weren’t intending on crossing but felt obligated to when cars stopped in unison, from both directions, whenever they saw us even deviate slightly as we walked down the road. Really considerate but so bloody annoying.
***********